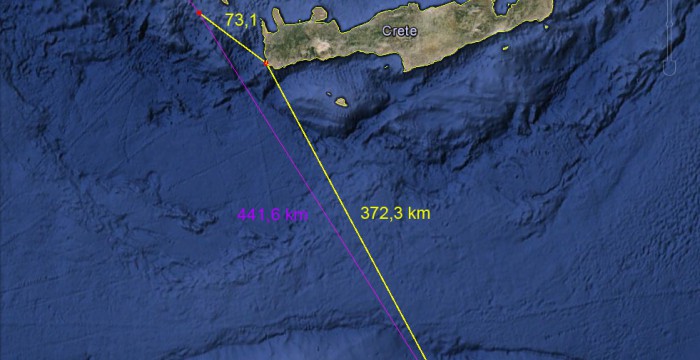 The probability that Feja has crossed Mediterranean in a non-stop flight during the night almost did not allow me to sleep the last night. After I received the data files with precise locations and time stamps today I spent some time trying to figure out which one was the case – night visit to Crete or non-stop flight (see the picture). Since this is not a 2×2 level exercise, I’ll present my entire calculations here. If anybody can find anything done wrong or if there is a reason to object – please do so! Of course – if at some point we will be able to download the full data from Feja’s tag, then there will be no place for any speculations. The data will tell. However – this is by no means certain. I will remind that at least two birds with quite important data sets in their tags – Tince in 2013/2014. after she reached the southernmost location of any European Black stork beyond Equator in central Tanzania and Lote in 2014./2015 after she reached the very south of South Sudan near the border with Kongo disappear without any trace. Also the tag of Agnese who was found dead / killed by people in Ethiopia in 2013 is still not available.

So here we are. I’ll start with the last two days of her flight over Sahara, where both time stamps (presented in bold) and their locations are fixed and the flight distances (in italics) and speed between them (in brackets) can be calculated with certainty.

Here I shall add some comments. The flight speed of Feja is quite impressive. I checked the flight speed of some birds for which we have complete data from the previous years for the sections of their flight over water – across Iskenderun bay and across the Gulf of Suez. The ground speed as fixed by their tags varied between 11.39 km/h and 15.68 km/h with the average value of 14.48 km/h.

Alternative is the non-stop flight (purple line) as fixed by gps locations without landing anywhere. The time between leaving the land until landing on the other side in this case is 18 hours and the distance covered oversea – at least 578.8 km. The average flight speed in this case is 27.6 km/h. Quite realistic and very much in line with the two first segments where the speed and flight time is known. So my preliminary assumption based on these calculations and the data we have so far is the following. The total distance covered by Feja in 46 hours (probably with some hours of sleep between October 27 and 28) is at least 1221 km, 578 km of them in a non-stop flight oversea. The total distance of (almost) a non-stop flight from the moment of leaving the land of Greece in October 26 until the last point of October 27, in Sahara, Egypt, is at least 831 km. The purple line shows locations as fixed by the tag. The yellow line presents speculation of a possible De-tour to stay overnight on land. 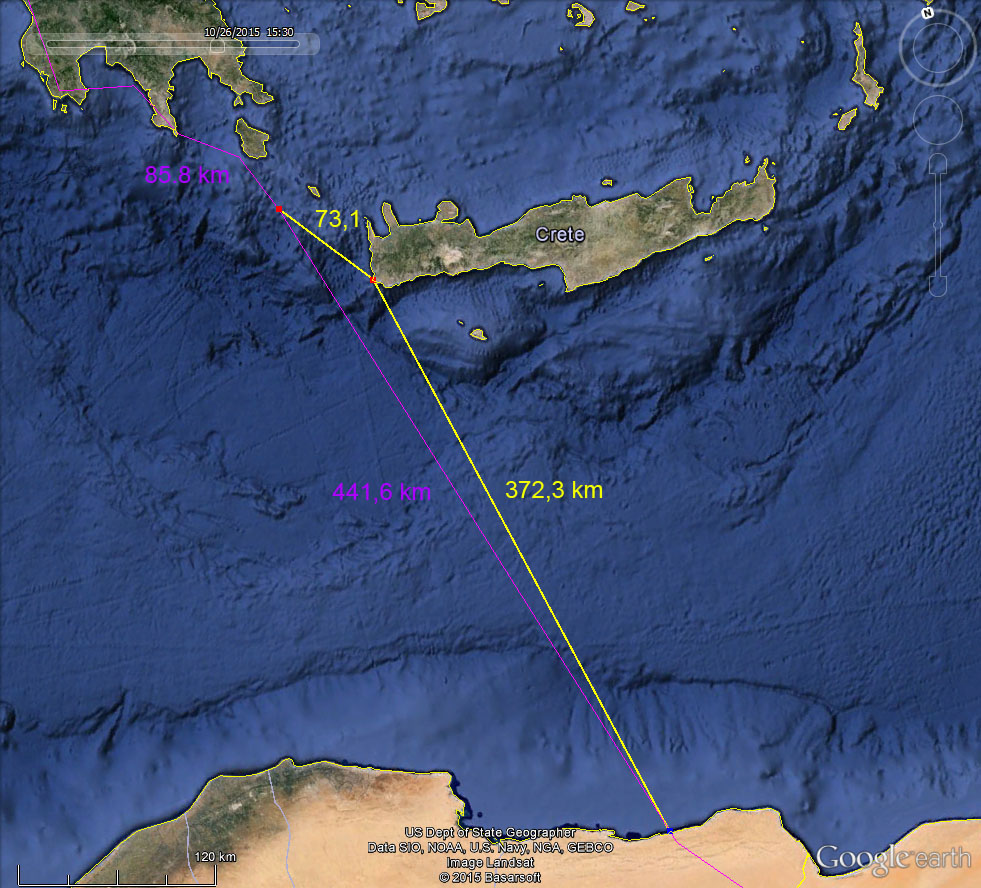